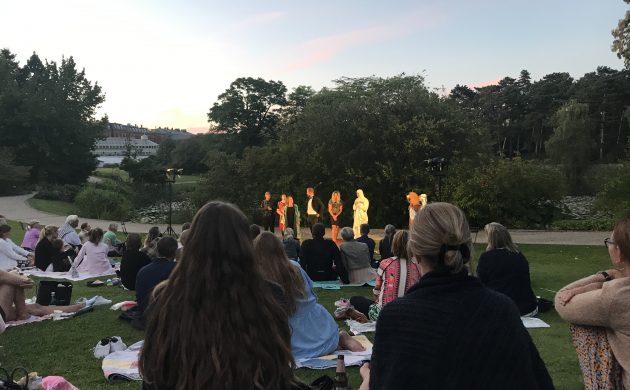 And just like that, Ian Burns emerged from the shrubbery – it was that kind of night. Let’s call it the Burnsy Bush.

And then more followed out into the light of the Botanicals: some tyrannical, others mechanical, all Athenians, making use of every blade of glass and flower of summer.

Outside in a beautiful garden overlooking an enchanting lake, performed in twilight on a warm summer’s evening, the setting couldn’t be better for this rendition of William Shakespeare’s ‘A Midsummer Night’s Dream’ and the reduced cast of After Hours Theatre Company didn’t let their adoring public down.

It’s no wonder they are back by popular demand, as this is on the fast-track to becoming an annual tradition in these parts.

In the same fashion that the corridors and stately rooms of Kronborg Castle have lent themselves to multiple retellings of ‘Hamlet’ these past four summers, After Hours is making its mark in the Botanisk Have, breathing new life into the city centre oasis.

And commendably, unlike ‘Hamlet Live’, they’re doing it in the original language. It’s a reminder that you don’t need to understand every single word to appreciate the tapestry of his work. The poetry and romance of the Bard transcends such barriers. Give in to the joy of his steady iambic pentameter and relentless rhyming couplets, and the narrative will present itself: thus!

Definitely not drinking Sprite Zero
Despite the idyllic surroundings, part of the production’s charm is its city centre setting. It is perhaps deliberate that you leave the hustle to enter a dreamland. Your sleep is punctuated by balloonists, bikers, birdsong, bugs and the busies/Babylon, but like minor disturbances in the night, they don’t quite wake you up.

The dream-master for the night is Jefferson Bond, a standup who was a standout in last year’s Crazy Christmas Cabaret. He implores the audience to give into the subject matter a la Timothy Leary. In fact a voice from the Burnsy Bush whispered as much minutes before: “Shakespeare must have been high when he wrote this stuff.”

We don’t need visual clues to know who Bond (Puck/Philostrate) will be playing when he returns. Both ever-present and energetic as the mischievous sprite, he connects with the audience from the off, deriving hilarity from the rich absurdity of his lines. The children in particular love his high-pitched utterances and quirky mannerisms.

Like Bond, every other performer in the nine-actor troupe doubles up bar one, and this requires some mighty quick costume changes to keep the running time down to a palatable 105 minutes –  more than an hour shorter than most full script productions.

For the four star crossed-lovers also playing Mechanicals, this is a huge ask, but the production not only succeeds but relishes in exploiting the opportunities – from director Thomas Magnussen and his stage manager Angelique Giroir, it is nothing short of a tour-de-force of careful planning and ingenuity.

For example, one of the many highlights in the play within a play is Quince’s (Burns) uncertainty regarding whom he should address with his prologue, as Theseus and Hipployta (Rasmus Emil Mortensen and Linda Elvira, also Oberon and Titania), reduced in company due to the necessary absence of four of the wedding feast’s esteemed guests, take their seats on opposite sides of the stage.

Love square baby!
In previous productions I’ve witnessed (I’ve also performed in a few), I’ve always found myself siding with the Mechanicals over the fairies and the lovers, ‘sitting through’ their scenes in anticipation of another round of thespian peasantry. But on this occasion I felt the ‘love square’ won the night.

Benjamin Stender (Lysander, Snout) and Søren Højen (Demetrius, Flute) made splendid foes, inhabiting their roles with all-out physicality. Assured direction made the most of their possibilities, with a ‘Planes, Trains and Automobiles’ awakening thrown in for good measure. It was a nice touch … for almost everyone involved.

Physically, Alexandra Jespersen (Helena, Starveling) and Thea Bell Schok (Hermia, Snug) had less to work with, perhaps, and sometimes their amour felt out of context with their portrayals of somewhat serious young women. But in their mechanical roles, they truly shone, breathing new life into smallish parts often outshone by the others. Hands down, they were the best Starveling and Snug I’ve ever seen.

Jespersen performed alongside Højen in That Theatre Company’s ‘Look Back in Anger’ last year, and she was unrecognisable in this role – always a sign of a good actor. But it is her co-star that I am anticipating great things for. Already, Søren Højen has the type of voice that one can close their eyes and instantly recognise. Partly reminiscent of Jude Law, it has an original, compelling tone that could take him very far indeed.

Shakespeare’s coming home: Never stopped the dreaming
There were no weak links on what was an undoubtedly a crowd-pleasing evening. Mortensen was a splendid Oberon, Elvira a feisty Hipployta, and Robert Moore was fully invested in Bottom, the anchor that spans the plotlines.

For Thomas Magnussen, this must be as good as it gets for a director: a splendid cast whom he can trust to deliver, performing one of the finest comedies ever written in a setting that knows no bounds, which begins in the retreating shadows and ends, literally, under his lucky stars.

For anyone who missed this spectacular (it ends on Sunday but is sold out for the remainder), let’s hope After Hours returns next year. In the meantime, anyone for ‘Swan Lake’ this winter?