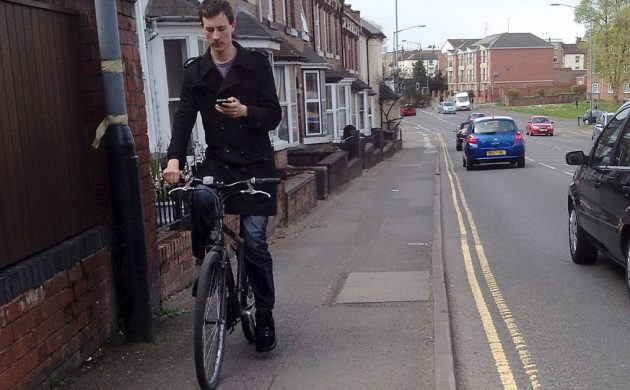 The Americans call them intersections, the Brits junctions. Personally as a Brit, I was brought up to loathe British American words.

But they’ve got a point with intersection. It underlines how it is a coming together, like international affairs or an interview – we all have a role to play.

So at the very least, when you enter an intersection, the least you can do is play your part and concentrate!

Attention span deficiency
According to an Epinion survey for Rådet for Sikker Trafik road safety council, almost one in five people in their 20s can’t even do that!

Some 19 percent of cyclists in Denmark aged 18-30 have confessed to using their mobile phone while cycling through an intersection within the past two months, compared to 9 percent among all cyclists.

Given that two-thirds of all serious accidents involving cyclists occur at intersections, this is grim reading for everyone … with the possible exception of undertakers.

Morons in the morgue
Epinion for Rådet for Sikker Trafik is launching a campaign called ‘Brug 2 sek mere’ (use two second more) in a bid to stop more morons heading to the morgue.

Some 1,910 cyclists were killed or seriously injured in accidents involving a bicycle being hit by a vehicle between 2015 and 2019.

Bad example to kids
Honestly, we could quote the fellow from the road safety council, but what do you think he said – it ain’t rocket silence: slow down approaching the intersection and be attentive!

“There is just no text message or update on Facebook that is so important that it cannot wait until you are quiet,” concluded Mathias Hjorth Frederiksen, the Rådet for Sikker Trafik project manager.

And perhaps bear it in mind that children could be watching your antics, think you’re pretty cool (you’re not) and copy your behaviour.

So you’ll have their blood on your hands to go with the grazed knee you suffered while you were intertexting.