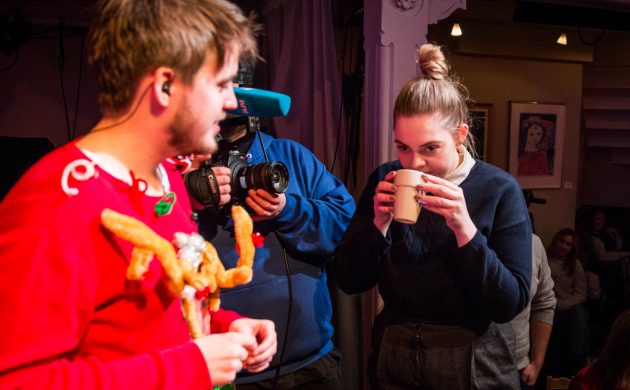 On the fourth day of Christmas, my new boss gave to me: four reasons to quit, three drunken photocopies, two MDMA doves, and a dose of Hepatitis C.

Yes, the julefrokost festive lunch season is upon us, but so is a siege of corona cases. Most of them are kids who aren’t unwell, but they’re infecting parents who won’t give up their Christmas cuddles.

Yesterday, the country recorded 4,013, which might or might not be the eleventh time we’ve smashed the 2021 record this month!

Big businesses buckling
And while the government is holding strong, kindly allowing the unvaccinated to live normal lives as long as they get quick tests that are proven to be inaccurate (not like in Austria, where they are the pariahs of society), business is buckling under the strain.

In the last week, a swathe of companies have cancelled their julefrokost – a Christmas lunch/dinner odyssey where most participants let their hair and trousers down in a den of iniquity – and bosses are blaming corona, not #MeToo.

Danske Fragtmænd, Danfoss, Aarstiderne and DR are all leading the way, even though the government has not requested it. In fact, they haven’t even advised it.

Small businesses suffering
“We experience that there have already been a lot of cancellations,” Mia Amalie Holstein from SMV Danmark, the organisation for small and medium-sized companies, told DR.

SMV Danmark represents the interests of a lot of event organisers and other such companies, and the trend is putting them under pressure, according to Holstein.

“Our companies can simply do nothing but provide these very lenient cancellation terms, because otherwise the customers go somewhere else,” she said.

And the cancelled lunches also hit other small businesses, such as hairdressers, clothing shops and taxi drivers.

“Those who have cancelled are primarily the big companies. The smaller companies are sticking to their bookings,” he told DR.

But is this true? For example, the Fadølsforsyning Nordsjælland restaurant confirmed that it had received five cancellations on the day it was contacted.

Corona hangovers not worth the risk
According to Jørn P Skov, the CEO of Danske Fragtmænd, holding company julefrokosts is too much of a risk this year.

“We were worried that people would get too close to each other and get infected once they have some alcohol in their system,” he said.

“Many of our employees are paid by the hour. So we risk having to shut down production.”