Christmas is all about the traditions and who you choose to enjoy those traditions with. It’s about the little moments that build up to the big night, and as each one passes, the Christmas spirit grows. One of those undoubted traditions is attending ‘The Nutcracker’ ballet at the national theatre’s historic Gamle Scene in Kongens Nytorv.

You might have seen it a few times and think why bother again? But every time is a different experience, because that’s the magic of ‘The Nutcracker’: from its fantastic choreography by George Balanchine to sublime music composed by Pyotr Tchaikovsky, it generates Christmas cheer among everyone who sees it.

The holidays wouldn’t be the same without this ballet, which funnily enough was created by Tchaivosky as a back-up plan. While he was writing the opera ‘Lolanta’, the management of the Mariinsky Theatre suggested he write a ballet as they were afraid the opera he was writing wouldn’t sell enough tickets. Sometimes the best things in life come from unexpected circumstances!

A ballet for all ages: watching and performing
Last Friday was the re-premiere of the show, and the room was packed with people of all ages, as this is a show to enjoy with the entire family.

In the first of the two acts, so much is going on that it’s impossible to know where to look. It’s conceivable that you could decide to focus on the mischief of the children one year, and then the adults the next, and have the experience of watching two different ballets.

But as well as the children perform – it’s hard to imagine there’s a ballet that offers as many parts to young performers than this one – the undisputed star of the first act is the majestic Christmas tree, first ingeniously spied through a keyhole by the children and then made to look ten times bigger and further away thanks to scenery designed to deceive our perspective. 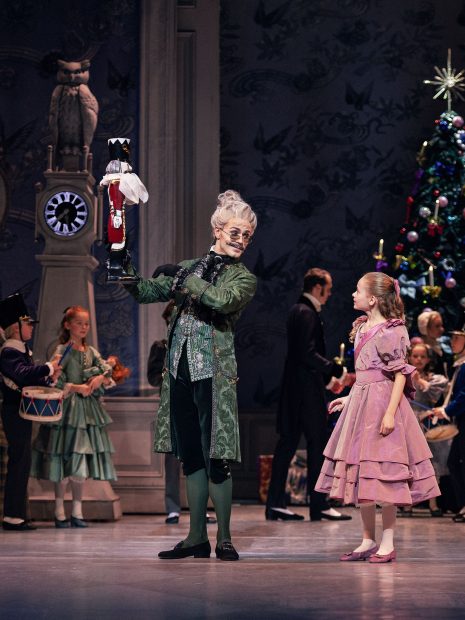 Waltzing the night away
The second act is by far my favourite. The stage transforms into an enchanted wonderland of colour. Sitting on their thrones overlooking a permafrost in front of a huge confectionery jar, the central character Marie and her prince are entertained by a host of different acts, seemingly from every corner of the world.

There are Spanish, the Arabian (an outstanding performance by Eleonora Morris), Chinese and Russian dances – but each with the same flavour … of Christmas, of course.

My absolute highlight was ‘Waltz of the Flowers’ – nothing can beat this exquisite music or the choreography. But also worth highlighting is the performance of the versatile Holly Dorger as the Dewdrop. She shines in her role as the flying fairy. She was recently seen in the Frank Sinatra-inspired ‘Come Fly Away’ in a sexy femme fatale role, so her transformation into angelical dewdrop for the night is all the more revelatory.

Whether it is already a tradition, or one you will add to your list, we truly recommend you make ‘The Nutcracker’ one of your Christmas moments this year.