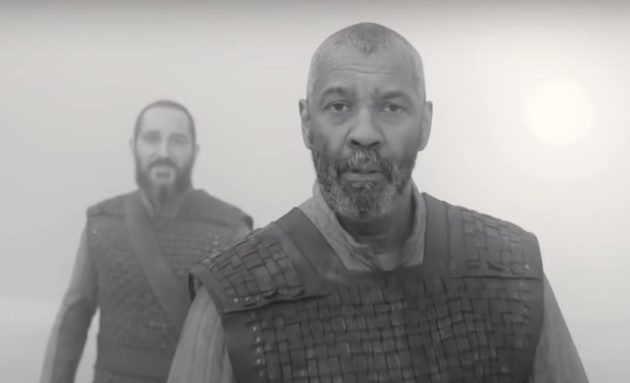 In an age of such … well … ageism, it’s refreshing to see Hollywood throwing money at the tale of a 67-year-old murderous throne-stealer and his manipulative wife, who at 64 is no spring chicken herself.

The Tragedy of Macbeth (released; 87 on Metacritic), with aforementioned sexagenarians Denzel Washington and France McDormand, isn’t the only adaptation doing the rounds at present. Granted, the other two are both Indian, but it’s an illustration of the demand for the Bard, even if you don’t always know he’s the inspiration.

Stealthy Shakespeare adaptations include Sons of Anarchy, My Own Private Idaho, Ten Things I Hate About You and The Lion King, and this past autumn and winter has served several more at the table of Titus Andronicus (we forgot to mention Sweeney Todd).

At cinemas, meanwhile, Romeo and Juliet retelling West Side Story (85) is retreading the 1961 classic lyricised by the late Stephen Sondheim. The word is that he, unlike Hamlet’s father, can sleep easy.

Boss in translation
Not sure if the Danish TV series Borgen, which is returning for a fourth season (DR; Feb 13), is strictly derived from Shakespeare. It’s the tale of a woman who becomes the first of her gender to take on what is traditionally a man’s role (so Shakespeare in Love if you like). We’ve come a long way since the female roles were the strict domain of pre-pubescent boys.

The new frontier is lingualism, and Sidsel Babette Knudsen is among a growing number of actors electing to take roles not in her mother tongue. While English is a breeze for Danish actors, Knuden speaks perfect French in The Translators (Amazon Prime) – there can’t be many who can claim proficiency in three different languages on camera.

British pair Charlotte Rampling and Kristin Scott Thomas are both well known for effortlessly crossing over into French, and now Dan Stevens (the heir in Downton Abbey) is doing the same with German in Drømmemanden (Feb 10). It might seem like a strange choice, but maybe he’s auditioning for the Tarantino follow-up to Inglourious Basterds.

So what’s new and worthy of your attention? Well, for binge-watching, try S1 of Yellow Jackets (CMore; 78), the tale of a high school girls’ soccer team crash-landed in the Canadian wilderness derived from Shakespeare’s The Tempest à la Lost. Different timelines serve up some splendid surprises, even though the final serving is as distasteful as the way the girls go about staying ‘Alive’ in flash-forwards. It’s a better choice than Stay Close (Netflix; 51), which is best avoided like early corona. The exposition in this series defies belief, and yet it managed to assemble such a promising cast.

The girls are clearly in charge this February as no less than five series have female title characters. None of them look brilliant. The Cleaning Lady (Feb 3 on HBO Max; 53) looks like an inferior rip-off of last year’s Maid; Naomi (Feb 3 on HBO Max; 72) mixes superheroism with conspiracy theory; The Girl Before (Feb 10 on HBO Max; 60) is a same house, different timeline miniseries that has its moments; Inventing Anna (Feb 11 on Netflix), with Julia Garner of Ozark in the main role, retells the story of the fraudster who convinced New York high society she was a German heiress; and finally The Woman in the House across the Street from the Girl in the Window (Netflix; 49) is a flat parody despite Kristian Bell onboard. Of course, the title character in One of us is Lying (Feb 18 on Netflix; 50) might be female. Ostensibly a Breakfast Club tribute, it’s more like Melrose Place.

The remainder aren’t really much to speak about: Scream 5 (Feb 3; 60) provides a Neve Campbell reunion with divorced pairing Courtney Cox and David Arquette we could have lived without; this year’s Valentine’s Day movie, Marry Me (Feb 10; NRW), is another outing for old crooked nose himself, Owen Wilson, this time going bad-ass Cyrano on J-Lo; Uncharted (Feb 10; NRW), with Tom Holland (Spiderman) and Mark Wahlberg, is yet another video game adaptation; Moonfall (Feb 17; NRW) is exactly what it sounds like … and the end of werewolves … from the king of disaster Roland Emmerich (Independence Day, The Day After Tomorrow). But don’t miss The Fallout (released last week on HBO Max; 84), a subtle post-school shooting drama that is far more compelling than the frigging Moon falling out of the sky.

That might very well be our pick of the month, although there are two documentary series worth checking out. While Janet Jackson (CMore; Feb 10; 58) speaks for itself, Murderville (Feb 3 on Netflix) is an unscripted police investigation series in which a different celebrity each week has to perform and then guess the murderer. Top tip: in Shakespeare, it’s always the weird guy who talks to himself.