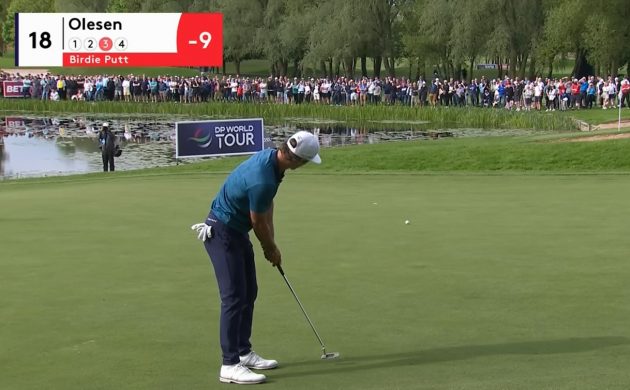 Yesterday brought redemption to Danish golfer Thørbjorn Olesen who won his first tournament since being cleared of sexual assault charges relating to an incident in 2019.

And he did it in extraordinary fashion by carving out an eagle and then a birdie to make up three shots in the final two holes to win the British Masters – the biggest win of his 15-year career.

The 32-year-old holed a putt of 30 feet on the 17th and then topped that with a 36-footer on the final hole to overhaul clubhouse leader Sebastian Soderberg by a single stroke (see highlights in video below).

Starting the final day three strokes clear,  he struggled, but heading into the 17th he knew what he had to do: absolutely the same as he managed on Saturday.

Big boost for his world ranking
Following his impressive sixth-place finish at the 2013 US Masters at the mere age of 23, Olesen looked a good bet to become the first Scandinavian to win a major tournament, but instead that honour befell Henrik Stenson three years later.

The wins, meanwhile, dried up for Olesen who after a run of one European tour title every year from 2014 to 2016 went on to win only one more tournament: the Italian Open in 2018.

The win has catapulted Olesen 203 places up the world rankings to #173, and he is now the fifth best ranked Dane behind twins Nicolai Hojgaard (83) and Rasmus Hojgaard (120), Marcus Helligkilde (132) and Joachim B Hansen (139).

However, he has a long way to go to secure a place on the 2023 Ryder Cup team, for which twins Rasmus and Nicolai are currently ranked 19th and 21st.

Could the Belfry win be a good omen?
This year’s British Masters was held at The Belfry, for so long the historic home of Ryder Cup golf. It hosted the famous 1985 edition when the European team finally ended a 28-year drought to claim the trophy again.

The British Masters was arguably the biggest UK tournament not so long ago: its winners list from the 1980s is a veritable ‘who’s who’ of golf from that era, boasting the likes of Lee Trevino, Save Ballesteros, Greg Norman and Nick Faldo.

But it was cancelled in 2009 due to a lack of interest among sponsors. Its winners since its return in 2016 has mostly been a collection of ‘who the hell are they’ players.

Olesen will be hopeful that 2022, in years to come, will be considered the year all that changed.