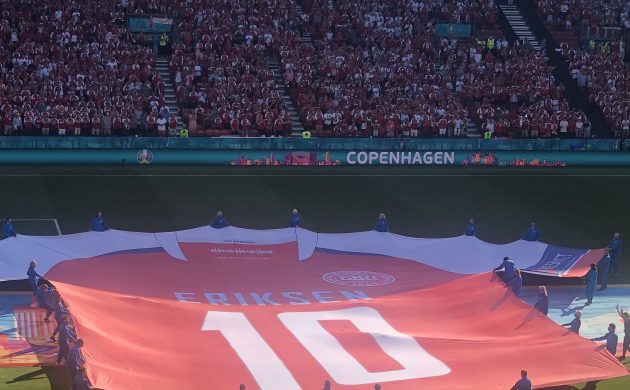 Eriksen could surely be the difference between making the semis and the final (all photos: Gitte Ørnkow)
June 20th, 2022 4:55 pm| by Ben Hamilton

June 12 marked a full year since Christian Eriksen collapsed with a cardiac arrest at Parken Stadium during his country’s opening game of Euro 2020.

Over the following hour his life lay in the balance; a nation’s collective thoughts willed him to pull through and live.

Denmark went on to lose the game 0-1 to Finland, but truly it was a day of victory: Eriksen regained consciousness in his hospital bed, scarcely able to believe how a fit professional footballer could suffer such a calamity.

Brutal truths
But the business world continues regardless of death, war, famine, disease and natural disasters. Had Eriksen been a share price, his stock would have crashed that day.

So too did Denmark’s odds of winning Euro 2020 and the 2022 World Cup, which it was already so well placed to qualify for.

Eriksen was their playmaker: the genius in attacking midfield who made the red and whites tick. Without him, their hopes seemed … well … hopeless.

Lazarus would be proud
The following 12 months have been good for the Danish national team. Not only has Eriksen made an astonishing comeback, but in his absence new matchwinners have emerged, taking the national team to heights not seen since the 1980s and 90s.

They destroyed Wales and saw off the Czech Republic to make the final four of Euro 2020, they qualified comfortably for the World Cup with maximum points and no goals conceded in their first eight games, and they currently lead their UEFA Nations League Group after three wins from four games.

Only the most pessimistic of Danish fans won’t be jumping on a bet365 bonuskode to back their national team becoming the smallest nation since Uruguay in 1950 to lift world football’s biggest prize.

Europe’s answer to Uruguay
The bookmakers have certainly changed their tune since lengthening their odds a year ago. As of today, they rate Denmark the tenth most likely team to win the 2022 World Cup, with odds generally ranging from 25/1 to 33/1.

That’s not that far off the number of World Cups a person can expect to see in an average lifetime, and as Uruguay has proven twice, along with Denmark and Greece in the Euros, smaller nations can dare to dream.

Particularly when you have playmakers like Eriksen and the likes of Mikkel Damsgaard queuing up to deputise, along with one of the best goalkeepers, Kasper Schmeichel, and attacking left backs, Joakim Mæhle, in world football.

Easier group beckons
The early hours of Tuesday morning last week brought the news that Denmark will again face Australia in the group stage – a team they have nothing to fear from. On the other hand, Peru, who lost to the Socceroos on penalties, might have posed more serious questions.

With Tunisia also in the group, Denmark should comfortably make it through to the knockout stages along with France.

Denmark, meanwhile, beat Austria 2-0 last Monday night, continuing a run of five victories against the central European country since 2018 for which the goal difference now reads 11-1.

The win takes them within inches of being seeded first for the Euro 2024 draw: which like the bookmaker odds again confirms that little Denmark, despite its modest population, is among the heavyweights in world football.