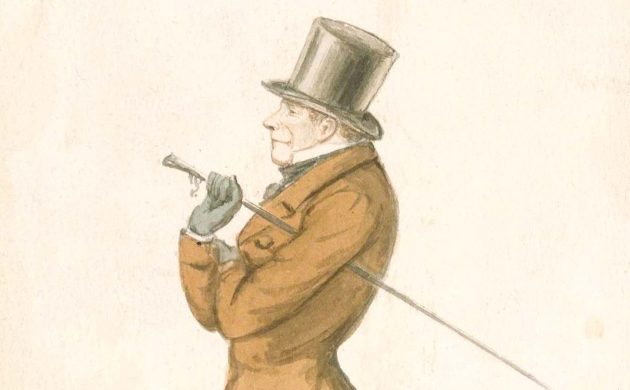 Copenhagen was all he needed to contemplate and philosophise
December 18th, 2016 7:00 pm| by Zach Tan

Every day I cycle past the yellow-orange walls of Assistens Kirkegård. Within rest some of Denmark’s most famous individuals, from Golden Age artists like Christian Købke and Christoffer Wilhelm Eckersberg, to the childhood-defining Hans Christian Anderson – good company for the revered Vigilius Haufniensis (watchman of Copenhagen), otherwise known as Søren Kierkegaard (1813-1855).

He loved this city
On my daily bike ride, I always take a few minutes to ponder how a city like Copenhagen could have produced a man as eccentric as Kierkegaard. After all, the well-arranged and somnolent city seems so at odds with his flamboyant and incendiary nature. Often called the ‘father of existentialism’, Kierkegaard was known to frequently stroll around sleepy Copenhagen, no doubt upsetting random strangers by asking probing Socratic questions and musing on his own thoughts.

His various eccentricities are well documented: from his quirky pseudonyms (Anti-Climacus, Hilarius Bookbinder etc) and his rollercoaster love life (he agonised for a year after his first engagement, before breaking it off in a spectacularly brutal and public fashion) to the way he interacted with others, like Ms Borries, his landlady at Dyrkøb 5. Initially hesitant to rent the rooms to Kierkegaard due to his reputation, he visited her, sat himself down in an armchair and declared: “Yes, here I be.” The story goes that his voice was so soothing and his look so sympathetic that Borries couldn’t help but lease the apartment to him.

He even became the laughing stock of Danish society – due to a very public back-and-forth with a satirical newspaper that arose from a slight criticism of one of his philosophical works, ‘Stages on Life’s Way’. However, even after the city publically shunned and made fun of him, Kierkegaard never left. He loved Copenhagen deeply, calling it “the most favourable habitat I could wish for”. It is fitting, therefore, that on October 1855, after a measly 42 years, he would depart life and city after collapsing on a stroll though the streets he so frequently walked.

Streets he watched over
Once spurned but now revered, Copenhagen doesn’t let us forget the extent of his celebrity. Throughout the city, one finds statues of him, including in Bibliotekshaven, the library garden at the Black Diamond and by Marmorkirken. Additionally, a plaque dedicated to him has been put up in the house he was born in – now a Danske Bank branch – at Nytorv. A restaurant has even been named after him in the Black Diamond library.

Most conveniently, the official website of Visit Copenhagen lists Kierkegaard’s monuments in an easily accessible format, noting main attractions like the aforementioned statues and plaque.

However, that didn’t satisfy me. I’ve spent countless hours in college tearing my hair out over his writings (fun fact: Kierkegaard was probably the author of the longest sentence ever written in philosophy – at a shocking 330 words) and I wasn’t going to be satisfied by a brief website pointing to the touristy statues of him. I suppose one good thing about the unchanging nature of Copenhagen is that one can still get a sense of the city in the 19th century, with many of the same buildings and streets existing as they were when Kierkegaard impressed himself upon them.

Calling of his name
Just a few minutes’ walk away, we find the church that Kierkegaard frequented in his childhood, Helligåndskirken. Before Vor Frue Kirke (Church of Our Lady; Copenhagen Cathedral) was completely renovated, his family would go every Sunday to the church from their apartment in Nytorv, and it was there that Kierkegaard and his siblings were baptised. In fact, Kierkegaard in his later years would revisit the church to listen to Sunday sermons … and to criticise the preachers that delivered them.

His attack on the church didn’t end there, though. He took issue with preachers using energetic and charismatic speech to deliver pseudo-credible sermons that aimed to convince people of Christianity’s role as ‘eternal truth’. But Kierkegaard could never wrestle himself away from the church. He considered dropping his writing to pursue a career in the clergy, but was hesitant because he could never settle his intellectual uncertainty towards the way Christianity was practised in Denmark. That being said, he did in 1844 preach at the Trinitatis Church, where he was confirmed.

Kierkegaard was also extremely cognizant of his divisive role in Danish society, calling it his task “to make difficulties everywhere”. In fact, Kierkegaard once wrote that he saw Copenhagen as “one great social gathering”. Furthermore, he would often go to Christianshavn, where he would observe Copenhagen. Apparently, this was all the travelling he needed to do, as he wrote in his journal that from Christianshavn “one seems to be far, very far away from Copenhagen.”

On my way back home, I sometimes stop by Assistens Kirkegård. It’s a good place to have a stroll on stressful days – its quiet serenity provides an ideal environment to unwind. No doubt, if this were perhaps the 1830s or 40s, a nosy young man would have interrupted my walk with his irritating questions and annoying mannerisms.