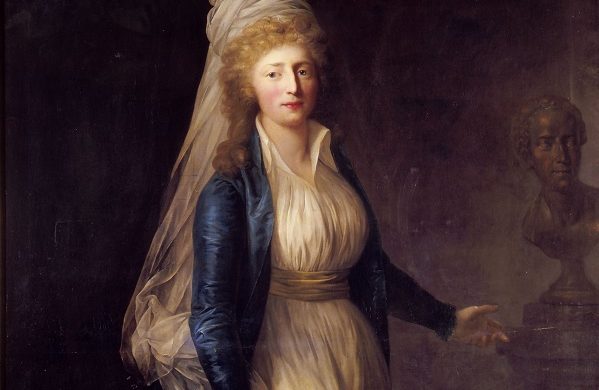 Golden-haired Louise Augusta was born in 1771 to the tragic Queen Caroline Mathilde and her lover, the German doctor Johann Struensee, who had been employed to treat Christian VII, who suffered from a severe and apparently incurable mental illness. Throughout his stint as the mad king’s personal physician, Struensee exercised increasing powers at court – virtually revolutionising the Danish monarchy with his model of enlightened principles – and in the consort’s bed.

The birth of the little princess in 1771 was a veritable open secret: even if Caroline Mathilde hadn’t boasted openly of Struensee’s sexual prowess before her chambermaids, the child bore an unmistakable resemblance to the de facto ruler of the country, a man who could hardly be dismissed as a German quack. In January 1722, Caroline Mathilde and Struensee were both charged with high treason under the orders of Dowager Queen Juliana. Struensee confessed after hours of torture and was drawn, quartered, broken on the wheel, and finally beheaded. Caroline Mathilde was sent into exile and died in Hanover, Germany at the tender age of 23.

But Louise Augusta posed yet another problem for the Royal Family. Though Struensee had immediately relinquished any claim of paternity on the child upon her birth, it was no secret that the golden-haired tot’s blue blood was besmirched by the low-born German usurper. The nation’s foremost statesman, Andreas Bernstorff, hatched an ingenious plan: the family would marry Louise back into the Royal Family. In 1786, the 14-year-old princess was married to the bookish Prince Friedrich Christian of Augustenborg (known for evermore as ‘Fritz’), some six years her senior, a match that had been set in stone since Louise Augusta’s auspicious birth.

Fanciful Fritz
Despite her uncanny resemblance to a man most of the Royal Family would have preferred to forget, Louise became a sensation at court. Even as a young teenager, she was lauded as the ‘Venus of Denmark’, and was, by all accounts, a jocund, bonny girl fond of dancing. Her marriage to dry young Fritz, known as ‘The Little Schoolmaster’, seemed doomed to fail. But a turnaround in the pair’s affections came after the Christiansborg Palace fire of 1794. Maria Helleberg wrote that Louise Augusta saved just three things from the palace inferno: her dog, her jewellery, and her husband Fritz. Thereafter, the two seemed to develop a genuine passion for each other.

After 1794, Louise Augusta and Fritz turned their lives into a fanciful experiment and jumped headlong into the trends of the time. Though titled, the couple were far from wealthy, but they were rich in eccentricities. Their masquerade balls were legendary. Their three children were raised according to alternative parenting principles.

Both Louise and Fritz began to espouse increasingly cosmopolitan political opinions – with Louise Augusta going even further than her husband in flirting with republicanism. She was an ardent supporter of the great savior-cum-antichrist Napoleon, and nothing seemed more romantic to her than a common life as a Danish citizen.

Norway? No way!
Her half-brother, Frederik VI, tried exhaustively to co-opt his popular sister as a political force and even offered her a diplomatic post in Norway. Louise Augusta steadfastly refused.

Meanwhile, Louise Augusta’s own daughter, Caroline Amalie, had made a love match of her own with the already once-married heir-apparent Christian Frederik, the future Christian VIII, himself the illegitimate son of Crown Prince Sophie Frederikke and Frederik Blücher. The idea to united two ‘love childs’ carrying the blood of the Blüchers and the Struensees on the Danish throne captured Louise Augusta’s imagination.

But while she harboured grand ambitions for her own beloved daughter, Louise Augusta’s marriage to Fritz was on the rocks. She could not abide Fritz’s zealous and ultimately fruitless attempt to become king of Sweden, and ultimately, their marriage collapsed.

Louise Augusta died in 1843, four years after her daughter was crowned Queen Consort of Denmark.