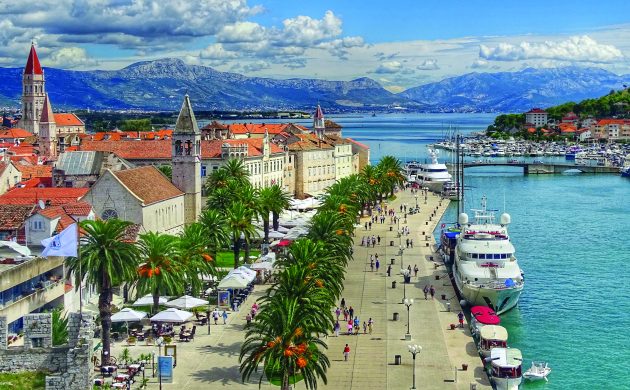 Denmark wasn’t there at the beginning – or was it?

Croatia’s ‘Big Bang’ occurred when Illyrian tribes settled in the area around three millennia ago. The Histri gave their name to the region of Istria and the Delmati to Dalmatia.

The Greeks (from the 4th century BC) and the Romans (1st century AD) left their mark – in fact, Emperor Diocletian (284-286) was born in Salona native and built a palace in Split – before the area was settled by Croatian tribes in the 7th century.

In 925 Croatia was united, and it remained a separate kingdom when it became part of the Holy Roman Empire in 1091, where it remained until World War I. Chopping and changing ensued and, by the end of World War II, it was part of a new country, Yugoslavia.

On battlegrounds
It is at the end of the Yugoslavian chapter, and the birthplace of modern Croatia, that Denmark makes its first appearance. Assigned to the country in 1992 as part of UNPROFOR, the UN peacekeeping units during the Yugoslav Wars becomes in the 1990s, Danish troops played a key role in efforts to minimise the humanitarian consequences of the conflict.

Denmark was one of the first countries to recognise Croatia (Slovenia was the first) – less than a year after it declared its independence – and that process more or less started when it started receiving Balkans wishing to escape the wars.

“Those who fled the war in the former Yugoslavia had to declare themselves either Croat, Serbian or Bosnian etc,” writes the historian Jeppe Wedel-Brandt.

“The Yugoslav identity was not accepted by the Danish authorities, even though it was exactly that type of identification that was part of the reason for fleeing in the first place.”

Full liberation came to Croatia first in 1995, following a decisive victory in what is now known as the Croatian Homeland War, and then in 1998 after the UNTAES peace-building mission was completed. Today, as an active member of the UN peacekeeping forces, its troops have served alongside Danes – in countries such as Afghanistan.

On the football field
As a new country Croatia faced the challenges of post-war reconstruction, but some respite from the hard work involved in its general social and economic development came in 1996 – and Denmark, once again, was involved.

Several great Croatian players had been denied participation in Euro 1992 due to the outbreak of the war including Robert Prosinečki, Davor Šuker, Alen Bokšić and Robert Jarni – to Denmark’s benefit as it replaced Yugoslavia and went on to win the tournament.

Four years later, the whole nation was watching as Croatia took on Denmark, the usurpers who had taken their crown – and in their pulsating 3-0 victory, Šuker’s divine chip over Peter Schmeichel will live long in the memory!

Handball too has offered some exhilarating fixtures over the years – particularly in the days of Ivan Balic, who Mikkel Hansen succeeded as the world’s best player – and Croatian hearts were broken when they lost to Denmark in the final of Euro 2008 (although the bragging rights are theirs again after a silver this year!).

But was Croatia bitter? Not at all, as that summer a Croatian sailing pair lent Danish duo Jonas Warrer and Martin Kirketerp Ibsen their boat to compete in the medal race of the 49ers – and ultimately win gold.

Strong support
A few years followed, with both countries firmly established as friends – a Croatian art exhibition in Copenhagen, ‘Euro 2020’, caused a stir with its prescient outlook as the new century came – and Denmark offered substantial support in 2005 to Croatia’s efforts to develop its public administration.

Croatia was in no doubt of what it had to do to join the EU, and Denmark gave its backing as it joined NATO (2009), as well as the Partnership for Peace (2000) and WTO (both 2000), amended its constitution to reduce presidential powers (2000-01), signed Stabilisation and Association Agreement with the EU (2001), submitted a formal application for the EU membership (2003) and began accession negotiations (2005).

The connection continues
A state visit by the Danish queen in 2014 cemented relations further – the president at the time, Ivo Josipović, received the Order of the Elephant – and it is interesting to note that Kolinda Grabar-Kitarović, the president since 2017, worked with former PM Anders Fogh Rasmussen during his time as secretary-general of NATO – where she worked in the role of assistant secretary-general for public diplomacy.

Denmark’s chance of revenge for Euro 1996, meanwhile, came in 2018 as the countries met in the last 16 of the World Cup, but it was not to be, with the Croatians once again prevailing – this time via penalties.

Croatia made the most of their luck by advancing to the final, demonstrating just how far this young, but historic country had come less than three decades after its birth.