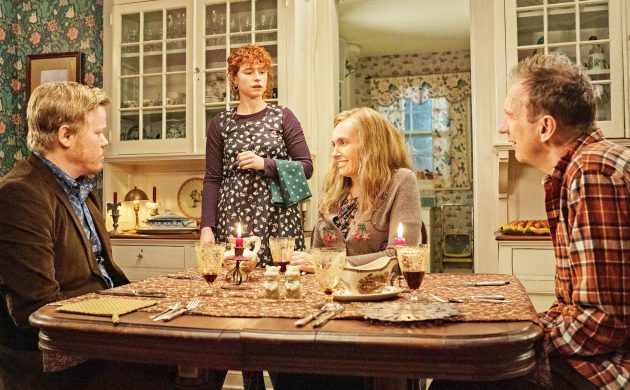 Carrie Fisher had a bizarre upbringing. When her actress mother Debbie Reynolds got worried about her LSD problem as a teen, who’s she gone and called? No, not Ghostbusters … Cary Grant!

Under professional guidance (he was warned not to watch North by Northwest under the influence) the veteran actor took 100 trips over a three-year period in the late 1950s in search of his true self.

“In one LSD dream I imagined myself as a giant penis launching off from Earth like a spaceship,” he recalled at the time. Pep talk over, Fisher got her part in Star Wars.

Two big Jessies
Of course, Hollywood has a habit of hooking up actors and actresses who share the same name. For example, Robin Wright starred in Toys with Robin Williams, Reese Witherspoon in Vanity Fair with Rhys Ifans, and John and Joan Cusack … I’ll give up there. Anyhow, Jesse Plemons and Jessie Buckley make up the jessiest role call of 2020 in the Netflix movie I’m Thinking of Ending Things (Sep 4).

While we’re excited to see Buckley (bigged up in a recent edition of On Screens) making herself at home stateside – she’s also in the fourth season of Fargo (from Sep 28 on HBO Nordic) in which an African-American crime family (led by curveball but inspired casting decision Chris Rock) goes to war with the Italian mafia in 1950s Kansas City – we’re almost delirious to note the film is the first from the mind of Charlie Kaufman (Adaptation, Being John Malkovich, Eternal Sunshine of the Spotless Mind – and another unisex name) for five years.

Toni Collette (who has appeared in films with actors called Tony, but none of them were famous enough to include) delivers another unsettling performance in this oddball thriller in which she bizarrely has the line “I’d misplace my own head if it wasn’t screwed onto my own head” – echoes of Hereditary, or what?

The right Wendy house?
Sherlock’s younger sister clearly inherited the family jewels. And with Millie Bobby Brown from Stranger Things on board, Enola Holmes (Sep 23; Netflix) would appear to be on the scent of a hit, but ahead of its premiere it’s got off to the worst possible start. One of the featured buildings, Portcullis House, wasn’t built until 2001, and it has run into problems with the Conan Doyle estate for portraying the great sleuth as somebody with emotions (for reasons too dull to share here). But it is directed by Harry Bradbeer, who helmed almost every episode of Fleabag, so it can’t be all bad.

Wendy (54 on Metacritic; at cinemas Sep 10) is the second Peter Pan universe effort to hit our screens this year, but it would appear this is not the follow-up that fans of Beasts of the Southern Wild were expecting from its director Benh Zeitlin. After all, they had been waiting eight years. For Pan fans, though, this offers something original: a modern day version embedded in more realism than is customary, but with all the usual escapism.

Ratched (Sep 18; Netflix) is an origins TV series about the antagonist nurse in One Flew over the Cuckoo’s Nest, here played by Sarah Poulson, fresh from her wonderfully quirky turn in Mrs America. It looks promising, but we’re not sure we can say the same about Poulsen’s other entry this month, the lockdown film Coastal Elites (Sep 13; HBO Nordic).

After Kenneth Branagh’s turn in an English-language version of Sweden’s most famous TV policeman, an origins treatment was inevitable. To keep the Scandi flavour, Young Wallander (Sep 3; Netflix) mostly features actors from the region, but performing in English.

Finally, two promising sequels, which have both elected to go back in time. Wonder Woman 1984 (Not Released Worldwide; Oct 1) is presumably after the Stranger Things market while The King’s Man (NRW; Sep 17), starring Ralph Fiennes and the aforementioned Rhys Ifans as Rasputin, is eyeing Sherlock Holmes’ domain, hopefully with a little more attention paid to the age of the buildings.

Lassie petering out
Elsewhere, at cinemas, we have the rather lamentable looking Lassie Come Home (NRW; Sep 3) – wasn’t the 2005 remake, with an all-star cast including the likes of Peter O’Toole and Peter Dinklage, enough to re-introduce this yappy franchise to new generations? The quick answer is that this new version is German. And there is the drivel that is After 2: After we Collided (NRW; Sep 10) which is Shades for young adults, if those same young adults’ brains have failed to reach maturity.

Pete Davidson’s character in Judd Apatow’s The King of Staten Island (67; Sep 10) is one such youth, but this tale of a boy becoming a fireman, co-written by Davidson based on his own upbringing, has an emotional punch and strong support from the likes of Steve Buscemi and Marisa Tomei. Also promising looking is The Devil all the Time (Sep 16; Netflix), a psychological thriller featuring a talented young cast including Tom Holland, Riley Keough and Robert Pattinson.

When Bond went gay
Over on TV land, the miniseries The Third Day (Sep 15; HBO Nordic) starring Jude Law is trying something new – a live episode thrown in among its seven-episode run, but is it just a gimmick? Another miniseries, the coming-of-age tale We are who we are (Sep 15; HBO Nordic), from director Luca Guadagnino (Call me by your name) looks a safer bet.

AP Bio (S3; Sep 4; HBO Nordic) and The Good Place (S3; Sep 27; Netflix) are the only returning series in what is a strong month for the small screen.

And finally, not far behind Proxima, but ahead of the forthcoming Lucy in the Sky, comes yet another female astronaut production, the Netflix series Away (Sep 4) starring Hilary Swank.

Hilary’s another unisex name, although it’s rare you come across a male version. George Lazenby used it as an alias playing James Bond (interesting post-Pride fact: it is believed the real Sir Hilary Bray was the first LGBT character of the franchise), and look what happened to him.