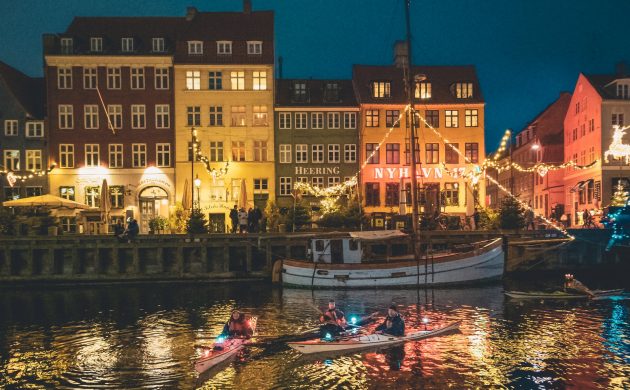 Sailing without lights to comply with the hygge nature of this photo (photo: visitdenmark/ Daniel Villadsen)
June 5th, 2021 8:31 am| by Natalia Joanna Bajor

The first thing new arrivals in Copenhagen notice is how expensive groceries are in most high-end supermarkets. The second thing they notice is how many Danes don’t seem to notice.

One orange for a dollar? One bite-sized chocolate for a pound? “Fill my trolley up!” our hosts say, while we suppress our curiosity to find out what a ‘five-dollar shake’ tastes like.

But the longer we’re here, the more we understand: while many of us come from naturally defiant countries where rules are habitually broken as a badge of honour, the opposite is true in Denmark.

As the recent adherence to social distancing and wearing facemasks suggested – along with the quick adoption of smartphones among the elderly to aid the country’s fast digitalisation, and waiting for the green light at pedestrian crossings – compliance is a national standard.

Danes buy the expensive grocery items in case the cheaper supermarkets sell out for the same reason they buy so many electric bikes – remember “there’s no such thing as bad weather, only bad clothing/equipment”.

Failure to do so would make them grumble, and the last thing they want to do is spoil the mood by complaining about the wind or Netto being sold out of baked beans.

Anything but effortless
According to anthropologist Jeppe Trolle Linnet, an expert on consumer culture, the compliance is rooted in hygge, which he contends is far more than cosy blankets and elaborate candle arrangements.

Hygge, according to Linnet, is a multi-dimensional cultural phenomenon that influences almost every single aspect of the everyday lives of Danes. The simple fact that Danes have this special word provides great insight into Danish culture.

“Hygge is essentially a signifier of how things should be done, even though the cultural implications can be quite claustrophobic and dull,” said Linnet.

The concept, he points out, was born out of the need to sanctify the middle-class cultural experience with a code of conduct regarding how to make meaningful and lasting bonds with other members of society.

“Although on the surface of things, hygge refers to a purely pleasurable experience, the centrality of the concept shows that deep down Danes recognise social interaction to be vulnerable and difficult,” he said.

“The term hygge effectively smooths interactions, but also lets us pretend that they are easy.”

Although the concept of hygge provides a rulebook on how to behave socially and secure a spot in the all-Danish social club, explains Linnet, it is also confining and restrictive.

In this context, hygge does not allow for much wiggle room: you either comply with standardised social norms or are left outside alone. You can guess which is the more popular choice.

Cold-weather friends
Denmark is known for its long winters, and this creates a certain dynamic within Danish society. Most people between November and March cocoon at home with warm blankets and candles, and it is during this period where the popular notion of hygge has its roots.

Since the dawn of civilization, it’s been necessary to find a warm and secure space in winter. And to create the ‘safety blanket’, when you carefully pick your social circle you need to be picky and methodical – for survival’s sake.

This creates a rigid societal divide: you are either ‘in’ or ‘out’ of the social circle; there are no in-betweeners. The choice needs to be sensible, educated and calculated; after all, the people you pick will get to spend all those vulnerable and difficult winter months with you, so there is no room for error.

This is why many expats feel left out and unwelcome when they first arrive in Denmark. It is extremely difficult for a newbie to penetrate established and calculated Danish social circles. Forget the easy-going social rules of your former home, because they do not apply here anymore – you are now being sized up as a friend according to whether you’ll survive a Scandinavian winter together.

To not be left out, both literally and figuratively, in the snowstorm, you need to comply with the hygge rulebook, as no-one wants to spend a long, gloomy winter alone. This is accordingly one of the major driving forces behind Danish compliance: the fear of being left out.

A fear of judgement
Conversely, given the need for conformity, it is important that a Dane is able to be their genuine self.

“It is important for Danes to feel that they show their authentic personality without guarding themselves,” explained Linnet.

“Danes evaluate social relations and situations according to whether they allow for this. Therefore they are reluctant to form new relationships easily.”

This fear of judgment, argues Linnet, is the primary reason why it is difficult for foreigners to get close to Danes. Quite simply, the risk of judgment by an outsider is greater than by “one of us”.

So while Denmark is viewed as one of the most egalitarian societies in the world, it has nothing to do with the common acceptance of diversity, like in most other places – quite the contrary.

“Danish equality is based on sameness,” points out Linnet. To be equal, you need to confine to general Danish rules – comply or you are out. This creates a concrete set of rules governed by a code of conduct that can be hard to follow.

Why it’s hard to find work
Many expats encounter difficulties finding a job in Denmark without knowing the local language.

While it is understandable that many careers require someone to speak the language of the country they work in – medicine, for example – the reasoning for others is often tied to social compliance.

Prioritising the candidate’s ability to socially bond with co-workers over their job skills is a  frustrating roadblock for many expats looking for that elusive first job.

This intricate cultural effort again proves to serve one main goal – “the pursuit of the simple life”, as Jeppe calls it.

Danes do not want to be challenged in their “pursuit of the simple life”, Linnet contends. Overcoming the outdoor elements of their lives is hard enough without having to concern themselves with social drama indoors – both at work and at home.

Although unwelcoming and cold to outsiders, Denmark might have perfected the formula of a simple and contented life to the extent it is often referred to as being one of the world’s happiest nations.