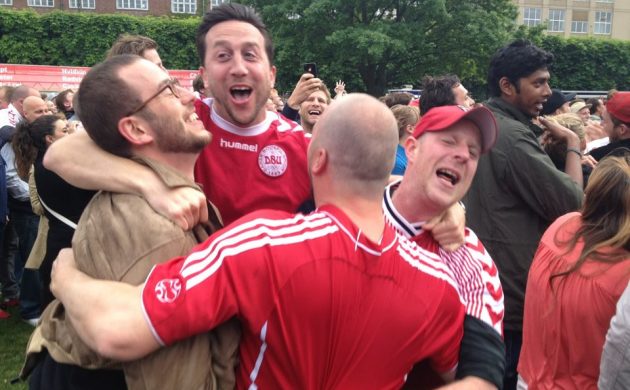 Sorry lads, you have to leave after the next penalty or the water canons will be on the way
June 9th, 2021 7:53 am| by Ben Hamilton

It’s the nightmare situation that football fans, bar owners and the authorities are dreading later this month.

A Euro 2020 knockout game has reached the 90-minute mark in deadlock. The pulsating drama has already yielded four goals, all washed down with copious amounts of beer, and now extra time beckons, and possibly a penalty shootout.

At this point, the time is 22:53: last orders at the bar, gentlemen! Corona restrictions apply!

If you think that sounds ridiculous, think again, as it happened recently with the Europa League final featuring Manchester United and Villareal!

Rioting a possibility
Fortunately, MPs are already on the ball.

The idea of a nation watching a penalty shootout on their phone on the way home or, even worse, drunk supporters refusing to leave the bar and rioting when the televisions are switched off, is too much to bear, so action is being urged.

Today, cross-party talks will seek to find a solution.

Longer hours proposed
“As long as it can take place under safe and proper conditions, then you should be able to see the whole match,” contended Venstre spokesperson Stén Knuth to DR.

More facemask regulations has been suggested as one possible solution.

“We come up with a proposal that reads that they should close at 02:00, but we do not come up with ultimate things. It is a negotiation,” concurred Dansk Folkeparti counterpart Liselott Blixt to DR.

Professor: Not a problem
Certainly the experts don’t think one or two extra hours will jeopardise the safety of the nation.

“Staying open until midnight won’t make much difference,” commented Professor Jan Pravsgaard Christensen from the University of Copenhagen to DR.

“When we have seen nightlife be a contributing cause of infections, it is when discos and nightclubs have been open until well into the night.”

A new playing field
The authorities are a bit worried though, and Peter Dahl, the head of emergency preparedness at Copenhagen Police, told TV2 he is hopeful the bars won’t have to close during the middle of extra time or penalties.

“It’s a new playing field in regards to what might happen on the streets afterwards, as it’s been such a very long time,” he said.

As well as bars, several outdoor venues, such as Ofelia Plads and the roof terrace at DGI-Byen, will be showing games, but the same rules will apply … for now.