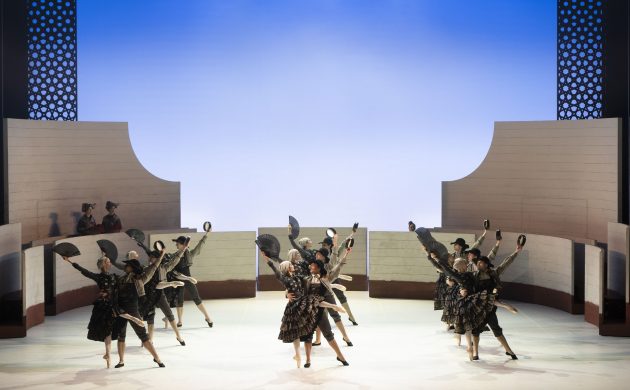 ‘Don Quixote’, the Spanish novel by Miguel de Cervantes written in 1605, has the central message that individuals can be right while society is wrong. It was duly considered radical for its day

Increasingly in 2022, the same message is both a strong and relevant one to convey today too.

More or less the same
‘Don Quixote’ was first staged in Copenhagen in 1983 by acclaimed director Jens Jacob Worsaae. Nobody dared to revisit it for another 40 years.

In 2016, Nikolaj Hubbe then took the ballet in a new direction away from Worsaae’s somewhat pompous but well-functioning scenography.

And now six years later, still with Hubbe calling the shots, the scenography and costumes have changed again, and a few adjustments have been made to the steps. Otherwise, though, everything is much the same.

Sublime dancers
If anything, this ballet at Gamle Scene is a partial re-enactment of the Russian classic ‘Petipa’, as Don Quixote and his travel companion Sancho Panza are mere supporting characters in a story about a young couple in love..

The young couple are danced with great bravura by Holly Dorger and Jonathan Chmelensky. They are both sublime dancers. Dorger with her angelic beauty and strong stage presence is particularly convincing as a youngster in love.

Among the rest of the cast, Chmelensky, the bold barber, is a less convincing choice, though an outstanding dancer.

Bland colours
This is a very long ballet with two intermissions. The scenography by Steffen Aarfing is bland – especially in the first act in which the beautiful Spanish folk costumes, designed in grey duce tones by Annemarie Woods, have nothing of note to play up against.

The stage is a bullfighter arena kept in a light greyish ochre with a large stationary blue sky, but only a hint of orange as the backdrop – and this is the problem.

The lighting by Lee Curran is meant to represent the warmth of the Spanish sun, but a hot sun should bring the colours to life and provide intriguing shadows. The small dots of red, provided by red roses tossed around the stage, are not enough to make this the visual treat it should be.

Selfies aside
Nevertheless, the woman sitting next to me was clearly impressed. Whenever she could, she was busy taking selfies with the stage as her backdrop. I wished the performance on stage could have captured her attention more, but no: she was clearly consumed with what was her most important task of the night.

The scenography, costumes and light invited more colours during the second and third acts, but even with the final act – the grand party – it was never visually spectacular enough, even though my neighbour kept on taking selfies.

Also, make sure you have a good view of the fine introduction 30 minutes before the show.