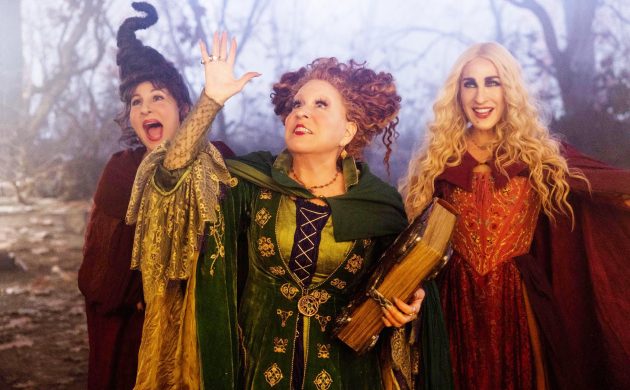 Let’s reboot” … in the 1820s, it sounded like mission impossible from a doctor to a gout sufferer; in the 1960s, like something Nancy Sinatra might say during a flip-flop break; and since the 1980s, our most commonplace office announcement. Normally it’s followed by groans.

Maybe that’s why the TV and movie industry has adopted the expression to mean flogging a dead horse … sorry, breathing new life into an old story, whether it’s setting it in a different era or continent (Pride and Prejudice could teach Phileas Fogg a thing or two about circumnavigation), or yet another origins story – Sherlock, Superman and Spiderman have had more reboots than the Commodore Vic 20.

This September is clearly reboot month, and this is where it peaks! Remember that you, the viewer, are in control: just switch it off and don’t reboot!

Just break their hearts!
Perhaps the most unwelcome reboot in September, and possibly of all time, is Hocus Pocus 2 (Disney+; Sep 30). Granted, it’s a sequel to an awful 1993 film, but in terms of unwanted resurrections, this is right up there with exhuming the woman in The Staircase 18 years after her death. Suffice it to say, this is a collective reboot in the teeth for us all.

The protagonists, who at the start of the original were hanged in 17th century Salem – in that respect Bette Midler and Sarah Jessica Parker are well cast – are joined by British actress Hannah Waddington, who on September 12 will pick up her second consecutive Emmy for the deeply unfunny Ted Lasso. Let’s hope this swiftly delivers a coup de grace to her stateside jaunt.

But really, who on earth is this aimed at: the same tweens who gargled Um Bongo at BFF birthday parties in the early 1990s? Today they’re in their early 40s and addicted to #MeToo. And the same could be asked of Pinocchio (Disney+; Sep 8), a live-action yarn with Tom Hanks as Giuseppe, which features the same animation as the 1940 original. Everyone who saw that and wanted more is either dead or very nearly there. Couldn’t they just burn him and save us all the bother (when you wish upon a fire etc)?

And why oh why are we revisiting the 1990s series Heartbreak High (Netflix on Sep 15), whose fanbase must have been the same gobby Australian teenagers, mostly of Greek descent in Melbourne, which it portrayed. This time, most of them are LGBT, but just as gobby.

Finally, American Gigolo (Sep 9), now a reboot series starring Jon Bernthal (not to be confused with Christopher Messina) in the Richard Gere role, has potential because we all like sex, right? There’s no definite release date in Denmark, but call me when you have one.

Put Howard’s end away!
Is Ruben Östlund a reboot of Lars von Trier, who has sadly been diagnosed with Parkinson’s disease (see page 9)? Well, the Swede’s first two films, Force Majeure (2014) and The Square (2017), confirm he is treading a path as unique as Von Trier’s, and with Triangle of Sadness (Sep 22: 68 on Metacritic), he’s already managed to do what the Dane failed to do: win the Palme D’Or for a second time. Nevertheless, this work of epic schadenfreude (the have-nots at the expense of the have-lots) is not without its detractors. While most concur it is overlong for a satire at 147 minutes, the Guardian laments that it lacks the subtlety of his earlier work.

All reboots are off regarding David Bowie, but such is his legacy that we’ll never run out of material for documentaries, of which Moonage Daydream (Sep 15; 85) is top drawer.

George Clooney is this generation’s Cary Grant, but would Mr Leach have stooped to the level of Ticket to Paradise (Sep 15; Not Released Worldwide), an awful looking romcom with Oceans co-star Julia Roberts.

The sexual content of Blonde (Sep 24 on Netflix), a Marilyn Monroe biopic, has also been grabbing headlines ahead of its anticipated release. Ana de Armas is an early shout for the Oscars for a portrayal that doesn’t bely her Cuban heritage – before you suggest she isn’t large enough to play the plus-size actress, a little mythbusting will reveal the size 16 claim originated from UK vs US confusion.

No awards for Daisy Edgar-Jones (Normal People) in Where the Crawdads Sing (Sep 22; 43), the long-awaited filmisation of the hugely popular novel, which ultimately rings hollow, let down by hair too perfectly tousled and shabbiness too chic, or Zak Efron in The Greatest Beer Run Ever (Oct 1 on Apple), the true story of a man who went all the way to the Vietnam War to hand over a few warm ones. Some stories are best left untold.

Halloween hopefuls abound with The Invitation (Sep 1; NRW), Bodies Bodies Bodies (Sep 8; 70), Beast (Sep 22; NRW), Devil in Ohio (Sep 3; series on Netflix) and Smile (Sep 29; NRW). Back with a vengeance in this age of TV being the natural home for drama, the short, sharp format that cinema provides is the perfect fit for horror. With Putin, Trump, the terror threat and climate change hiding behind our sofas, we all need a bit of escapism, right.

Well, if cheap shocks is your ticket, opt for Florence Pugh and Harry Styles in Don’t Worry Darling (Sep 22; NRW), which should be the bomb if its ‘making of’ story is anything to go by. Director Olivia Wilde apparently fired Shia LaBeouf for being the douche he is well reported to be and then replaced him with Harry Styles, who she started dating mid-shoot. But if this film is anywhere as good as Booksmart, we’ve got no need to worry, darling.

The jury’s out on what Reboot (Sep 20), a comedy about a show being revived following a two-decade hiatus, will be like. More a semblance to the thing it’s satiricising, perhaps. As Nancy said: “One of these days these reboots are gonna walk all over you.”