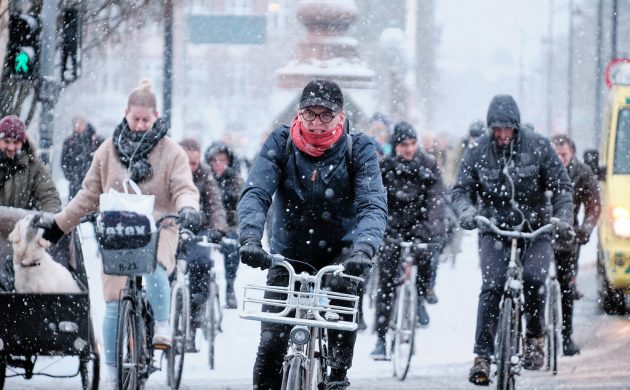 It’s slippery out there today! Denmark has woke up to a covering of snow and frost, and the white stuff is continuing to fall – albeit mostly sleet.

According to yr.no, the sleet will continue until at least midday in the capital region, but could very well return in the afternoon and early evening. The thermometers might suggest the temperature is 1 degree Celsius, but it will feel like minus 3 thanks to the moderate wind speeds.

So, it is important to watch your step, whether it is cyclists waiting at a red light, motorists taking a routine corner or pedestrians walking close to the road.

Two tragic accidents over the weekend have shown how quickly our lives can be taken away.

Fatality at Klampenborgvej bus stop
The first took place at a bus-stop on Sunday morning near a Helsingør Motorway exit in north Zealand.

A  51-year-old woman was killed when she was struck by a car after a male motorist lost control.

The accident took place near Exit 16 on Klampenborgvej. It is believed the woman was waiting for a bus.

It has not been established whether she was in the shelter itself or standing in the ‘bus pocket’ – the part of the road where buses pull in to pick up passengers.

A 43-year-old woman from Funen was struck by a train whilst crossing the line with a friend.

It would appear that she misjudged the speed of the train, which hit her at 180 km/hour.

The fatal accident was reported to the police at 23.20.