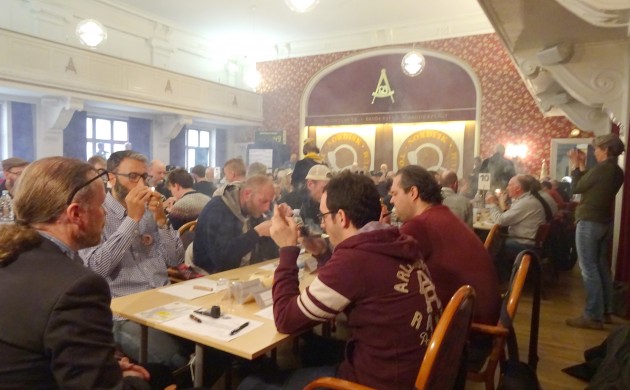 Popeye the sailor man had one, and so did Gandalf the wizard. While Sherlock Holmes had three, but not a calabash, the one synonymous with the deerstalker hat and monocle.

When faced with a difficult case, the fictional detective would retreat to solve what he called a “three-pipe problem”, and he isn’t the only one, as the method of smoking has been favoured throughout history to aid relaxation and contemplation and spark mental ambers aglow.

The likes of Albert Einstein, Joseph Stalin, Greta Garbo, Virginia Woolf, Ray Charles and Niels Bohr all enjoyed smoking a pipe, and were they alive today, there’s a very good chance they would be puffing away on a Danish one.

A piping hot-bed
Denmark has long been a hot-bed of pipe smoking and making, a culture that has been enjoying a second wind in recent years.

According to Michael Iversen – the head of the Nordic Tobacco Guild and the organiser of the recently-held 2016 Open Danish Championship in Pipe Smoking – its 38th annual edition, the pipes have never stopped smouldering.

“Pipe smoking got big in the 1980s, and more than 400 participants took part in the tournament. Everyone smoked a pipe back then – prime ministers, lawyers and TV personalities – so there was a lot of focus on the culture of pipe smoking and everyone wanted to be a part of it,” he told the Copenhagen Post Weekly.

“Now we have around 110 participants in the competition plus a couple of hundred visitors to the pipe and tobacco exhibition.”

Living the good life
Iversen contends that when smoking went out of style, there was no-one around to teach the younger generation how to do it and the number of pipe smokers decreased dramatically. But the culture has seen a resurgence in recent years, partly due to more Danes embracing a more refined lifestyle.

“It’s part of the rise in people enjoying good food, good whiskey, good cigars and a refined lifestyle. People smoke less, but they smoke the best,” he said.

“In the 1970s, people smoked all day long and until their pipes fell apart. But now people buy expensive pipes and good tobacco and enjoy it. It’s kind of a lifestyle statement more than anything. You can see on the internet and in the Facebook groups that a lot of young people are very interested. It’s not like a tsunami of young smokers or anything, but it’s growing nice and easy.”

A family endeavour
For one of Denmark’s premier pipe makers, Nanna Ivarsson, the craft is a family affair.

The daughter of noted pipe maker Lars Ivarsson and granddaughter of the legendary Sixten Ivarsson – also known as the grand old man of pipe making in Denmark – Nanna Ivarsson is one of the few female pipe makers in the industry. She also happens to be one of the best.

Ivarsson produces about 50-60 pipes per year and her clients are solely based abroad: primarily in Japan, the relatively new market of China, the US, Russia, Germany and Switzerland.

Not the full pipe dream
However, high-end pipes have yet to catch on in Denmark, she argues.

“I don’t think we have that culture in Denmark. Anything over 100 euros for a pipe in Denmark would be considered very expensive. Danish people prefer their nice watches, shoes and purses, but with pipes I think they’re more reserved.”

The top pipes don’t come cheap. Anne Julie, one of the first female pipe makers, currently has a pipe for sale at over 13,000 euros – a tidy sum for most people.

“It came very naturally to me because I was always in my father’s workshop and have met all the dealers and pipe makers since I was a very young girl. For me, making pipes is about my many years of experience looking at wood and embracing what the grains tell me.

“You can see that a bird’s wing has a nice flow, or the sail of a ship, for instance. It’s the same with a bit of wood on the beach. There are many of nature’s shapes that you can see every day that are beautiful. For wood you look at the grains.”

Secret’s in the air
Spearheaded by the likes of Sixten Ivarsson, modern Danish pipe culture began in earnest around 1950, and there were once a number of cigar and pipe tobacco producers and small pipe factories dotted across the land.

Iversen credits the traditionally large number of smokers in Denmark for the production of cigars and pipe tobacco and small pipe factories. But it could also be a question of longitude and latitude.

“It has been discussed that the Danish climate – the temperature and moisture in the air – provides excellent conditions for pipe smoking,” he said.

If you want to learn more about pipe smoking and manufacturing, the Danish Pipe Shop (danishpipeshop.com) offers lots of information in English.

MICHAEL IVERSEN
The 2016 Open Danish Championship in Pipe Smoking is a true test of a pipe enthusiast’s craft. The event is serious business: the internationally recognised rules are four pages long! However, according to Michael Iversen, the president of the Nordic Smokers Guild, the rules can be summed up pretty simply. “The goal is to smoke as long as possible using a standardised pipe and three grams of tobacco,” he explained.

In the 1980s, the art of pipe smoking was at the peak of its popularity. And over 400 contestants would compete at the event. Today, it attracts just over a hundred.

Yet pipe smoking seems to have been growing international appeal. At the competition this year, individuals from the United States, Russia and China came to compete at the event.

Iversen noted that pipe smoking was “a real status symbol in countries such as China. It has become very popular there and so people from the country are travelling to Europe for events like ours.”

SHANE IRELAND
Shane Ireland, a journalist for an American pipe smoking website, travelled to the competition for the accompanying pipe exhibition, as well as to see the main event.

It is the quality of the pipes for sale and in the exhibition that makes Danish varieties special, he contends.

Ireland believes that per capita, Denmark is one of the most popular countries for smoking pipes in the world. One trend both nations have in common is the changing demographic of pipe smokers. “There is a real increase in interest amongst young people in pipe smoking – in America as well as in Denmark.”
Ireland predicted that the expert-level pipe smokers would smoke for “at least two hours” to win the competition. And he was right: the winning time this year was two hours and 36 minutes.

MR LONG
Among the visitors from China was Mr Long, who has been a frequent attendee at pipe events for many years. However, he was not taking part in the competition this year and was instead looking forward to connecting with old friends and admiring the competitors in action.

He noted a vast difference between similar events in China and ones held in Denmark. He believed the contrast in the style of events make attending the different competitions interesting for collectors and casual enthusiasts.

But all the events have one thing in common. “They allow smokers from all over the world to communicate,” enthused Long.

Certainly people greet each other like old friends as they connect over stories at conventions across the globe.

ANDERS NILSSON
One of the pipe makers at the show was Anders Nilsson, who is one half of Vollmer & Nilsson of Malmö and a member of the Swedish pipe smokers association. He made the short distance over in order to take part in the exhibition this year and summarised the experience as “a lot of fun”.

“It is a great time and so close for us in Malmö,” he said.
Tighter smoking regulations in Norway and Sweden have made large-scale events such as this much less common, he explained. So despite being from Sweden, this is a local event for Nilsson.

With a reputation as one of the best pipe makers in Sweden, Nilsson is well placed to comment on the enduring appeal of the pipe. “People appreciate the craft, the handmade aspect and also the local craftsmen who have worked on them,” he said.

Nilsson also acknowledges the trend of younger people increasingly smoking pipes. “There is a real renaissance among new generations to experience the tradition of pipe smoking.”