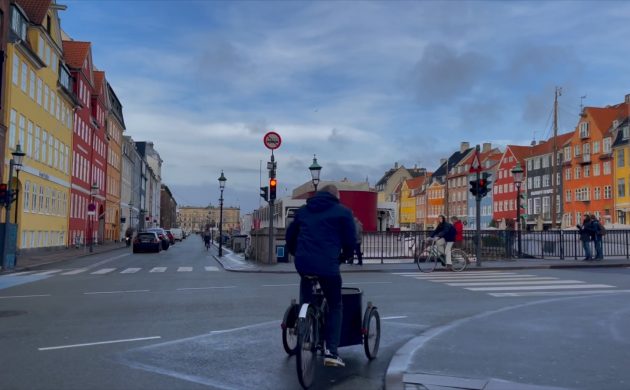 There are worse place you could deliver a paper, but it is frigging raining today!
February 3rd, 2022 11:51 am| by Ben Hamilton

It’s pissing down outside and I’ve got to deliver around 700 newspapers to 70 odd venues in central Copenhagen, Nørrebro and Vesterbro.

My cargo bike lost its cover years ago – during the COP15 climate summit in December 2009, to be exact; strange because it snowed a whole lot – and I’ve run out of bin-liners.

But in truth I’ve been quite lucky with the weather over the nearly five years I’ve been personally delivering our free newspaper.

Following a management buyout in 2017, my colleagues Hans Hermansen and Christian Wenande and I have been taking care of half of our total distribution.

It’s a good way to cut costs and also put a face to the paper and meet clients, but an almighty drag for the mug on the cargo bike when it rains.

Tough industry
I’m not sure how proud I should be as an editor who personally delivers his newspaper, or anything related to the newspaper, in fact.

We’re in a dying industry and most people’s news needs are taken care of online, where of course we have had a presence, at cphpost.dk, since our launch in 1998. In the next couple of months, we’re hopeful of launching a new website.

But I strongly believe that a periodical newspaper (in our case, monthly during the winter and early spring, fortnightly over the rest of the year) is the most effective way for internationals to keep up with the news that is relevant to you in Denmark.

A quick whizz through our news pages will inform you of anything you might have missed via social media. We try to be comprehensive with our coverage and select the stories most likely to impact your lives.

Wading through the news, every single day, can be a waste of time – particularly if your main interest is in the affairs of your homeland, or sport.

Editor for nearly 12 years
I’m also not sure how proud I should be that I’m the longest serving editor of a national newspaper in Denmark.

Firstly, it’s debatable whether we are a national newspaper. We cover all of the Danish news, both in and outside its borders, but we’re local when it suits our needs and our name speaks for itself.

And secondly, I’ve had an unfair advantage, as for the last five and a half years of my time as editor, which started in May 2010, the newspaper has not even been a weekly.

So the stress, which I felt acutely from May 2010 until midway through 2016, has somewhat dissipated. Our staff has got much smaller, but that’s not a disaster when you want a quick turnaround.

So when Grae Minors, an overseas correspondent for the Bermuda Broadcasting Company, seemed impressed by my newspaper-boy skills and proposed joining me for part of my deliveries in mid-January, I thought why not.

The result is below. Thank you Grae, and many thanks to our readers for continuing to pick up the newspaper when you see it!